To share your memory on the wall of Jessie I. Sweeney, sign in using one of the following options:

Provide comfort for the family by sending flowers or planting a tree in memory of Jessie I. Sweeney

Provide comfort for the family by sending flowers or planting a tree in memory of Jessie I. Sweeney

Print
Jessie I. Sweeney, of Quakertown, formerly a long-time resident of Perkasie, passed away on Thursday, April 22, 2021, in St. Luke’s Hospital, Upper Bucks Campus - Quakertown. She was 99.

She was the beloved wife of the late John L. Sw... Read More
Jessie I. Sweeney, of Quakertown, formerly a long-time resident of Perkasie, passed away on Thursday, April 22, 2021, in St. Luke’s Hospital, Upper Bucks Campus - Quakertown. She was 99.

She was the beloved wife of the late John L. Sweeney for 31 years until his death in 2004.

Born at the family home in Conshohocken, she was the daughter of the late John Perry Smith and Mary (Crouse) Smith. Jessie was a 1939 graduate of Conshohocken High School.

Mrs. Sweeney had been employed for 10 years as a file clerk and general office worker by the former William M. Wilson’s Sons, Inc., of Lansdale, now known as GasBoy, a manufacturer of petroleum dispensing products.

She was a long-time active member of St. Andrew’s Evangelical Lutheran Church, Perkasie, where she had sung in the choir for nearly 50 years.

A gifted musician, Jessie enjoyed playing the piano, using her talents until shortly before her death to entertain the residents at her retirement community. Blessed with a lovely soprano voice, she was always singing, from hymns to popular tunes. Jessie had also loved to garden.

As a meticulous crafter, she delighted in creating personalized greeting cards, which she sent to friends. Her all-embracing smile, her extraordinarily sharp wit, and her lively interest in the world around her remained constant until her death.

Mrs. Sweeney is survived by her daughter, Janis I. Simons, of Boyertown; four grandchildren: Maryann Washington and her husband, George, of Lansdale, Bert Booz and his wife, Sandra, of Warminster, Vincent Booz and his wife, Janet, of Sellersville, and Tiffany Henning and her husband, John, of Lansdale; six great-grandchildren: Jessie, John, Amanda, Julia, Jack, and Sophia; and two great-great-grandchildren, Alexander and Hailey.

In addition to her husband, she was preceded in death by three brothers, Edward Hill, John Perry Smith, Jr., and Leonard B. Smith.

Her funeral service will be held at 11 a.m., Thursday, April 29, in St. Andrew’s Evangelical Lutheran Church, 20 Dill Avenue, Perkasie, PA 18944, where a viewing will be held from 10 a.m. until time of service.

In lieu of flowers, donations in Mrs. Sweeney’s name may be made to St. Andrew’s Evangelical Lutheran Church at the address above.
Read Less

To send flowers to the family or plant a tree in memory of Jessie I. Sweeney, please visit our Heartfelt Sympathies Store.

We encourage you to share your most beloved memories of Jessie I. here, so that the family and other loved ones can always see it. You can upload cherished photographs, or share your favorite stories, and can even comment on those shared by others. 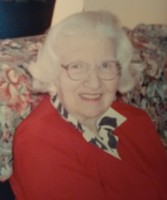