To share your memory on the wall of Mary E. Marzin, sign in using one of the following options:

Provide comfort for the family by sending flowers or planting a tree in memory of Mary E. Marzin

Provide comfort for the family by sending flowers or planting a tree in memory of Mary E. Marzin

Print
Mary E. Marzin, of Sellersville, formerly of Philadelphia, passed away Friday, April 16, 2021, in St. Luke’s Hospital, Bethlehem. She was 83.

Born in the Germantown section of Philadelphia, she was the daughter of the late Francis an... Read More
Mary E. Marzin, of Sellersville, formerly of Philadelphia, passed away Friday, April 16, 2021, in St. Luke’s Hospital, Bethlehem. She was 83.

Born in the Germantown section of Philadelphia, she was the daughter of the late Francis and Marie (Gallagher) Marzin. Mary was a 1957 graduate of Little Flower High School.

Family was everything to Mary. One of her favorite things was to spend time with her children, grandchildren, and then, later in life, with her great- grandchildren and other extended family. She loved to cook and try new recipes. Mary was famous for her mini quiches that she lovingly took the time to make from scratch and which were featured at many a family gathering. Gram had the reputation with the grandkids of providing the best Sunday morning breakfast, which was a feast consisting of all their favorite foods.

There were many family picnics with her brothers and sisters over the years, often with Wiffle ball tournaments that generally ended in a water balloon fight. Mary shared lots of laughs with her sisters and brothers over the years. No matter the occasion, there were always lots of jokes and riddles shared and often piano or guitar music and a sing- along.

Music was one of Mary’s passions. She enjoyed playing the organ, piano, and even the keyboard. She was also known to clean to the sounds of her favorite artists, especially Eddy Arnold, Patsy Cline, and Johnny Mathis. She also had a great appreciation for Engelbert Humperdinck.

Mary was employed by Harry J. Lawall & Sons, Inc., in Philadelphia, where she met many dear friends that she kept in touch with, even after her retirement in 2012. The “girls,” as she called them, always found time to make trips to Sellersville to visit.

Her Mass of Christian Burial will be celebrated at 11 a.m., Saturday, April 24, in St. Hilary of Poitiers, 820 Susquehanna Road, Rydal, PA 19046, where a visitation will be held from 10 a.m. until time of service. Interment will be private.

To send flowers to the family or plant a tree in memory of Mary E. Marzin, please visit our Heartfelt Sympathies Store.

We encourage you to share your most beloved memories of Mary E. here, so that the family and other loved ones can always see it. You can upload cherished photographs, or share your favorite stories, and can even comment on those shared by others.

Helen Morrin, Auchinleck Family, and other have sent flowers to the family of Mary E. Marzin.
Show you care by sending flowers

Posted Apr 26, 2021 at 12:34pm
May this tree stand in recognition of a beautiful heart and sole. May you fly high my sweet Mary.

Posted Apr 23, 2021 at 09:14pm
We pray the love of God enfolds you during your journey through grief. We always enjoyed Mary's company, so glad we knew her & her special gifts.

Posted Apr 21, 2021 at 11:57am
Dear Melissa, Maura & Family, Our sincerest sympathies for your family's loss. Our thoughts and prayers are with you all.

Flowers were purchased for the family of Mary E. Marzin. Send Flowers 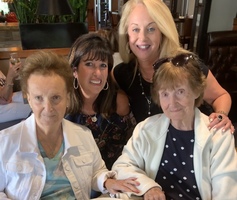