To share your memory on the wall of Paul Fisher, sign in using one of the following options:

Paul was born February 21, 1931, in Baptistown, New Jersey, to the late Warren and Gertrude (Compton) Fisher. He graduated from Woodrow Wilson High School in 1949.

A truck driver for nearly 60 years, Paul had driven over two million local miles, the equivalent of driving around the Equator 80 times!

Married to Lois (McGuirk) Fisher for over 57 years until her death in 2019, they met at St. Paul’s Lutheran Church, in Camden, New Jersey, where Lois was a Sunday School teacher. Lois had tried to get information on Paul from one of her students, Paul’s nephew Steve.

A lifelong Christian, Paul was a member of Bethel Baptist Church, Sellersville for 43 years, along with his wife. Early during their membership, he drove a bus for the church’s bus ministry, bringing children and seniors to services.

An avid bowler, Paul had toyed with the idea of going professional at one time. He had also enjoyed watching the Philadelphia Phillies and Eagles. He could also shoot a mean game of pool.

Paul enjoyed slapstick humor, such as Jerry Lewis, the Three Stooges, and even Jim Carrey. Skilled in the construction trades, he had enjoyed woodworking in his spare time.

Paul was slow to wrath and well-known for his being meek, kind, and humble, but he was the type of person one might underestimate. That would be a mistake as he could be fierce if he needed to be. He even survived a bout with the coronavirus!

Paul most loved spending time with his grandchildren, and Pop Pop particularly enjoyed going to the R&S Diner, Telford with them and Lois.

In addition to his wife, he was preceded in death by his daughter Sandy.

A private graveside service will be held for immediate family only. For out of state relatives, please feel free to share a memory or story about Paul.

To plant a memorial tree in honor of Paul Fisher, please visit our Heartfelt Sympathies Store.

Print
Private graveside services will be held for family only.

We encourage you to share your most beloved memories of Paul here, so that the family and other loved ones can always see it. You can upload cherished photographs, or share your favorite stories, and can even comment on those shared by others.

Posted Mar 15, 2021 at 09:46am
Paul was one of a kind. He came to work for me part time after retiring from his full time job. He was always available to work and never complained about anything.
He never got excited or angry when we had to wait on a job site. He would get his stool from the truck and polish a little on the truck till it was his time to unload.
All the drivers liked Paul and he so enjoyed the camaraderie.
To me Paul was a giant of a man and a solid Christian .
We had numerous talks about Faith and talking to him also strengthened mine.
I’m proud to say that he was a friend of mine and he will never be forgotten.
Larry Kratz
Comment Share
Share via:
V

Posted Mar 03, 2021 at 09:26am
Grandpop was one of the most patient men I have ever met. He loved his family and worked hard to provide. There are many memories of my grandfather, but sometimes the smallest moments can mean the most.
Everytime my grandpop came to visit I knew to check his shirt pocket. He always had strawberry mentos in there. He would let me feed them to him and I would try and close his lips so he couldn't spit it out. Simple, but he always remembered. Who knew at 35 it would be a memory I would still remember.
Another memory is that every time we came to visit grandpop would give us his change that was saved up all year until we visited. Me and my siblings always ended up with about 15.00 each and we thought we were rich!
He was a special man and loved my many. He was simple, kind, and giving. I know he and my grandmother are in heaven together and she is probably critiquing his driving, eating habits, and snoring. They are finally together and for this I have peace. Love you always Grandpop ❤ 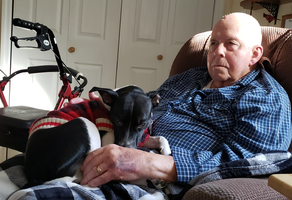