To share your memory on the wall of Norman G. White, sign in using one of the following options:

Provide comfort for the family by sending flowers or planting a tree in memory of Norman G. White

Provide comfort for the family by sending flowers or planting a tree in memory of Norman G. White

Print
Norman G. White, of Sellersville, passed away on Friday, February 26, 2021, in Doylestown Hospital, Doylestown, PA. He was 89.

He was the beloved husband of the late Teresa A. (Loprete) White for 64 years until her death on July 2, 201... Read More
Norman G. White, of Sellersville, passed away on Friday, February 26, 2021, in Doylestown Hospital, Doylestown, PA. He was 89.

He was the beloved husband of the late Teresa A. (Loprete) White for 64 years until her death on July 2, 2019. They married on February 5, 1955, at St James Catholic Church in Newark, NJ. Norman was pre-deceased by his late sister, Betty Mayercik, and her late husband, Mike, and their late son, Captain Ronald M. Mayercik, (shot down in F14 jet leaving Laos on a mission in Vietnam).

Norman was born in Newark, NJ, on May 24, 1931. He was the son of the late George and Mazie (Broadhead) White. Norman was a graduate of Central High School, Newark, NJ.

Mr. White was a veteran of the U.S. Army. He joined the Army in Officer’s Training. He was a Sergeant in the Korean War from 1951 to 1953. In 1953, the Army wanted him to enlist as an officer, but he wanted to return home to the USA.

Norman met the love of his life, Teresa Ann, in 1954, and they were married in 1955 in Saint James Catholic Church. Teresa (Terry) attended high school at Saint James High School. They met through friends who ended up being the Best Man, Joe Solovsky, and Helen Sirakides (Maid of Honor).

From 1959-1969, Norman had been employed as Supervisor of the Television Production Line at Westinghouse in Metuchen, NJ. In 1969, Norman took an internal company transfer to Bryant Electric (an affiliate company of Westinghouse), located in Bridgeport, CT for six years. Norman left Bryant Electric to work for Circle F in Trenton, NJ, (which later was purchased by Westinghouse), where they produced porcelain receptacles until 1990. After an early retirement, Norman and Terry moved to Fort Pierce, FL. They returned to Sellersville, PA when Terry missed her children and grandchildren in 1996.

In his retirement years, Norman could not sit idly around, so he had many jobs to keep him busy, including working in commercial real estate; he was also a manager of Mt. Lake Pool & Patio Store in Abington, PA; a U.S. Postal worker in Sellersville, PA, and he worked as a weekend salesman for Mt Lake Pool & Patio Warehouse Sales. He also volunteered with his local parish.

Norman was an avid sports fan. The New York Giants and New York Mets were his passion! In his younger days, he was a Brooklyn Dodger’s fan, but when they moved to LA, he became a devoted New York Mets fan. Sports was an outlet for Norman. He was a baseball coach for his son’s baseballs teams, and in CT, they won a divisional title under his management.

A deeply religious man, Norman was a participating member of all the parishes he belonged to. In Hazlet, NJ, he was an usher for Holy Family Parish; in Fort Pierce, FL, he belonged to the Knights of Columbus with his local parish. At St. Agnes Catholic Church, in Sellersville, PA, he was the sacristan and handled adoration scheduling for the Blessed Sacrament on a weekly basis. Norm retired permanently to take care of his wife, Terry, who had developed heart disease and required his daily care about 5 years ago.

Extensive travels took the Whites to Europe, the Middle East, Alaska, Hawaii, Puerto Rico, and cruises in the Caribbean. His daily routine almost until his death included either walking and/or riding his stationary bike. Norman loved to eat and socialize with his family while enjoying a glass of chianti. In recent years, he had also enjoyed viewing Netflix and his favorite murder mysteries in foreign languages and using his computer to follow his favorite sports teams.

He will be missed terribly by his entire family! We LOVE YOU Dad, Grandpa, and Great-Grandpa always. Till we meet again in Heaven!

A visitation will be held from 10 to 10:45 a.m., Monday, March 8, at St. Agnes Catholic Church, 445 North Main Street, Sellersville, PA 18960, where a Mass of Christian Burial will be celebrated at 11 a.m. Interment will follow in the adjoining parish cemetery.

In lieu of flowers, memorial donations in Mr. White’s name may be made to St. Agnes Cemetery Perpetual Care Fund at the address above.
Read Less

To send flowers to the family or plant a tree in memory of Norman G. White, please visit our Heartfelt Sympathies Store.

We encourage you to share your most beloved memories of Norman G. here, so that the family and other loved ones can always see it. You can upload cherished photographs, or share your favorite stories, and can even comment on those shared by others.

Posted Mar 03, 2021 at 10:13pm
We are so sorry to hear about your father, we have a lot of great memories of your Mom and Dad and all the fun we had in the day.My gosh when I think about it ,it has been over 50 yrs. Our prayers and love are with all the family. Love Chuck and Lorraine
Comment Share
Share via: 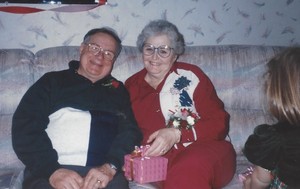