To share your memory on the wall of Elwood J. Jones, sign in using one of the following options:

Provide comfort for the family by sending flowers or planting a tree in memory of Elwood J. Jones

Provide comfort for the family by sending flowers or planting a tree in memory of Elwood J. Jones

Print
Elwood J. Jones, of Quakertown, passed away on Thursday, February 18, 2021, in LifeQuest Nursing Center, Quakertown. He was 89.

Born in Philadelphia, he was one of nine children of the late Robert J., Sr. and Anna Helen (Simms) Jones.
Elwood J. Jones, of Quakertown, passed away on Thursday, February 18, 2021, in LifeQuest Nursing Center, Quakertown. He was 89.

Born in Philadelphia, he was one of nine children of the late Robert J., Sr. and Anna Helen (Simms) Jones.

Mr. Jones was a veteran of the U.S. Air Force.

Elwood had most recently been employed as a truck driver. During the 1970s, he had also worked in construction in Panama and had helped to build the Pan-American Highway.

As an avid fisherman, Elwood had enjoyed excursions with his fishing buddies to Lake Ontario and the Jersey Shore, sometimes including deep sea fishing.

The essence of Elwood was his huge, welcoming heart, his generosity of spirit to family and friends, and his near saintly devotion to his faith and his church. A man of principle and strength, Elwood was a gift to all who knew him.

Mr. Jones is survived by numerous nieces and nephews.

A visitation will be held from 10 to 10:45 a.m., Friday, March 5, at St. Agnes Catholic Church, 445 North Main Street, Sellersville, PA 18960, where a Mass of Christian Burial will be celebrated at 11 a.m. Interment will follow in the adjoining parish cemetery.

In lieu of flowers, memorial donations in Elwood’s name may be made to the Sisters of the Blessed Sacrament, 1663 Bristol Pike, Bensalem, PA 19020.
Read Less

To send flowers to the family or plant a tree in memory of Elwood J. Jones, please visit our Heartfelt Sympathies Store.

We encourage you to share your most beloved memories of Elwood J. here, so that the family and other loved ones can always see it. You can upload cherished photographs, or share your favorite stories, and can even comment on those shared by others.

Posted Mar 05, 2021 at 03:48pm
Elwood was a dignified man of great faith. I remember fondly he and his dear sis at many Masses over the years in Quakertown and Sellersville. Prayers for all his family. Mike S. Lansdowne, PA
Comment Share
Share via:
JW

Posted Mar 03, 2021 at 09:30pm
One of my first memories of Elwood was saying the rosary with him at the old St. Isidore's Church in Quakertown many years ago. Certainly a man of faith! Jerry Washcalus
Comment Share
Share via:
RB

From Rosita Taken March 30, 2017 Even when she had the dimentia or Alzheimer disease she still remembered the responses to all prayers the Rosary, Divine Mercy, Litanies, Station of the Cross. Elmwood said they’ve been reciting those prayers at a very young age taught by sisters of St Katherine Drexel. When Jeff passed away I started going to 8am mass and they always sat at the chapel. When they started praying the rosary I asked if I could join them that was 2013. I prayed with them on Sundays and on daily mass since then. They helped me pray when it was hard to pray alone. I’m blessed to have known them. May they Rest In Peace 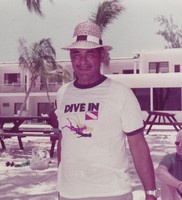 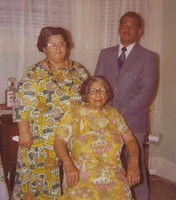